The dances we teach 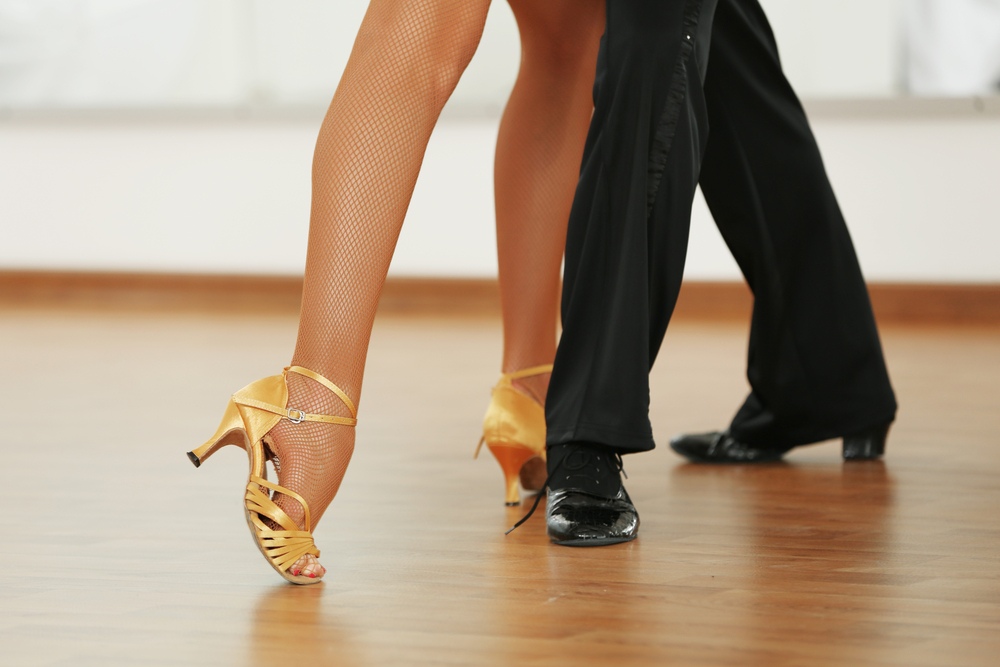 What exactly is Ballroom and Latin dancing?

No one can really agree on a specific definition. The beauty of ballroom and Latin lies in it’s constant change and development. New dances and variations continue to be added all the time.

At the Ballroom Dance School, we dance a variety of styles. Our classes and events explore dances from eras gone by to modern up-to-date styles. If you’re looking to learn some Latin flair; some Argentine expressiveness; or Ballroom elegance, we have the classes for you!

Dance styles that we teach

Recognisable by its tempo, The Waltz is danced in 3/4 time and is a very beautiful and romantic dance.  Many beginners enjoy this style as the basic steps can be learnt very quickly. The waltz is characterised by rise and fall, and sway actions. It has a graceful, romantic, and sometimes melancholy feel.

This dance is what many people think of when they hear the words ‘ballroom dancing’, made famous by Fred Astaire and Ginger Rogers.  Typically the Foxtrot is danced to ‘Big Band’ types of music and is a very popular social dance. It is a smooth, progressive dance characterized by long, continuous flowing movements across the dance floor. The Foxtrot can be deceiving though. It looks very easy, but is one of the most difficult dances to do!

The Ballroom Tango is a passionate dance, with its origins in Argentina.  Not to be confused with the Argentine Tango, the Ballroom Tango can feature some of the intricate footwork associated with it’s South American relative, but is mainly danced in a closed position.  The dramatic music accompanying this dance makes it a popular choice with beginners and more advanced dancers alike.

The Rumba is a beautiful, slow and sensual dance with lots of emotion.  This dance provides the basis for many other Latin dances, in particular the Cha-Cha-Cha. The characteristic feature is to take each step without initially placing the weight on it. Steps are made with a slightly bent knee which, when straightened causes the hips to sway from side to side, in what has come to be known as Cuban Motion.

An exciting, syncopated, Latin dance, which originated in the 1950s. This cheeky, flirty dance is characterised by the syncopated ‘Cha-Cha-Cha’ timing.  It can be danced to traditional Latin music as well as fitting to many popular songs, and is a fun dance for beginners to learn. It is a derivation of the Mambo through its Latin music, and is also a stepchild of the Swing.

With its influences coming from Brazil, the Samba is a party dance featuring lots of different rhythms.  Often danced to ‘Carnival’ style music, the Samba is very popular amongst beginners with the music really encouraging the style. Samba is a fun dance that fits most of today’s popular music.

A catchall name for disco dances extremely popular in the 1970s. Today it mostly refers to the unique partner dance done in ballrooms and nightclubs to disco or any pop music. The Hustle features steps that are common with swing dance.

This dance is frequently referred to as Triple Step swing due to the rhythm of the basic triple step. It consists of six and eight count patterns, danced with a bounce and a rock step back by man and woman to begin . East Coast swing is the base for all swing dances.

The Merengue is a popular dance of Haiti and the Dominican Republic and is a true Latin dance. There is an old tale about a very brave and famous military officer wounded in battle and developed a limp. A celebration dance was given for the returning hero and thus the Merengue was born.

Salsa is the Spanish word for “sauce” denoting a “spicy” and “hot” flavour to this popular dance style to a complex mix of many different rhythms. The fusion of an Afro-Cuban beat with enhanced jazz textures results in an aggressive high energy pulse which has become popular everywhere. Many of the patterns are closely related to those of the Mambo and Cha-Cha-Cha.